What's the connection between anxiety and sleep?

Have anxiety and can’t sleep?

It feels like a never-ending cycle, doesn’t it? Your mind is racing, so you can’t sleep; and because you can’t sleep, you’re exhausted the next day and feel ill-equipped to handle your responsibilities, which brings about even more anxiety.

Mental health experts say that sleep disruption and sleep disorders are often a symptom of many mental health issues, so it’s not surprising that it has a front row seat with anxiety. Millions of Americans struggle with long-term sleep disorders, especially with how the planet at large – and our own personal worlds -- seems to be rapidly changing and moving. 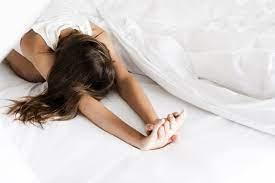 “A lot of times, I feel like I can’t keep up, and I’m so tired of worrying that all I want to do is sleep,” says Victoria, a 48-year-old mother of four. “But I can’t sleep, and I worry that I can’t sleep, and it just gets me going in circles.
“The other day, I read about a guy who didn’t sleep for something like 11 days – he supposedly set a record – and that his lack of sleep felt like Alzheimer’s, and that he was nauseated and just overall unwell, obviously.

“I’ve never gone 11 days, but when you’re sleeping on and off for barely four hours a night, it feels like 11 days. It’s a nightmare. As a matter of fact, I think I’d rather actually have nightmares.”

If your sleep problems have been sticking around longer than you’re comfortable with, it may be a good idea to see a doctor so you can be referred to a sleep clinic. However, a sleep action plan may be the first step – you might be encouraged to try a mixture of medication and therapy, so that you can challenge your thinking while also giving your body a chance to rest.

But with or without medical intervention, there are certainly ways for you to improve your sleep and help manage your anxiety.

Shut off the screen. Ask a person if they’d rather run a marathon three times in a row or give up their screen, and they might just choose the marathon!

Kidding aside, we know how tough it is for some to limit screen time. Social media is often a source of connection to friends and the big, wide world out there; the laptop or phone may even serve as your preferred place to stream your favorite shows. But that light that comes from your screen? Your body thinks that’s daylight, so it makes it harder to sleep. Further, if you’re addicted to checking your texts and emails, you may be sending yourself to bed with anxious thoughts about work – so maybe do yourself a favor and shut it off, giving yourself a little bit of freedom.

Water, water, water… instead of alcohol and caffeine. (Just not before bed – getting up to go to the bathroom will definitely keep you sleepless!!

Too much caffeine affects anxiety levels, and so does alcohol, especially if it’s consumed right before bedtime.

Water, after all, helps flush those toxins away – it might help flush the anxiety away, too.

Move it. And by that, we mean exercise. Not into yoga? Not into marathons? No problem. Dance in your living. Go for a 20-minute walk in your favorite part of the city. Take of your shoes and do cartwheels on the grass. Hop on a treadmill or an elliptical machine and catch up on a podcast or two. Whatever your preference for exercise, do it. Exercise has been known to help with anxiety, but if nothing else, it might tire you out enough to knock you out.