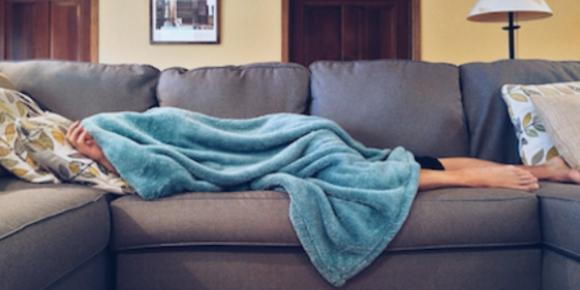 Anxiety is all around us, and no wonder. Consider that every day, our lives are inundated by perfect social media feeds, news of international terror, reports of climate change and mounting financial stress. Once upon a time, as humans, our fight-or-flight response was designed to protect us from charging saber tooth tigers and wooly mammoths – but today, that response is often triggered by our spouses, our friends, our colleagues, our news channels, and sometimes, our very own thoughts and reflections. It’s no longer prehistoric animals that might eat us for breakfast that’s causing us to feel like we’re in danger; it’s the everyday occurrences, the events of our daily lives.

And because we can’t necessarily escape from those things, it can feel as though we’re persistently and perpetually trapped by what we fear. Feeling on edge without relief causes a lot of strain on our amygdala, that region of the brain that governs our emotional responses, and when that’s constantly under stress – well, let’s just say that that can take its toll.

First, what is anxiety?

Anxiety is a disorder, an ailment, all on its own. It’s a reaction to stress, and it has physical features as well as emotional ones. Scientists claim that anxiety actually begins in the amygdala.

Harvard Health Publishing explains that “as neurotransmitters carry the impulse to the sympathetic nervous system, heart and breathing rates increase, muscles tense and blood flow is diverted from the abdominal organs to the brain.” Typically, anxiety is there to serve us, especially over a short period of time – it actually helps us prepare for crisis and confrontation by putting our guard up and helping us stay on guard and on alert.

But when anxiety sticks around for a while – or in some cases, a long time – it actually starts damaging our mental and physical systems. It breaks us down emotionally and physically, causing things like irritation, lightheadedness, dizziness, frustration, helplessness, and more. How to help a child suffering with anxiety.

Although studies have just begun on the connection between anxiety and chronic illness, interest in the subject is growing, because there’s now sufficient evidence that anxiety has great influence over a person’s physical functioning, or lack thereof. Many medical professionals are starting to believe that anxiety actually contributes to a host of other disorders and other ailments, including migraine headaches, irritable bowel syndrome, and other physical discomforts that seemingly have no other explanation or cause.

Marie, a 43-year-old medical transcriptionist, was diagnosed with anxiety in her late 30s, but has suffered with a number of illnesses since she was 16 years old.

“My family thought for the longest time I was a hypochondriac, or I was making stuff up, because you name it, I got it,” she says. “And for a while, I felt like, ‘Are they right? Am I crazy?’ But I couldn’t explain why I was always the one to catch a cold first. Or why, when I got into a fender bender that most people would just walk away from, I had whiplash that just wouldn’t seem to heal. Or why my periods caused indescribable pain, to the point that I couldn’t move without wanting to scream.”

After seeking the advice of her family doctor and her neurologist (Marie was also diagnosed with epilepsy), she found comfort in the care of a licensed therapist, who suggested to Marie that her anxiety might be contributing to the duration and severity of her numerous ailments.

“For the first time, I came to consider that maybe there was a root cause to all of this. It was the first time that someone actually painted it in a new light for me -- that you know, maybe my stress was actually preventing me from healing,” she shares. “It wasn’t that I was crazy, it was that maybe my stress is what’s causing all of this stuff to stick around… and maybe on some level even brought it on.

“And if that’s too hard to wrap your mind around, at the very least, consider that because I’m so anxious, because I’m so stressed, my immune system, my whole system... it’s too compromised to actually work on healing my body.”

One of the most common ailments reported by those suffering from anxiety is of the gastrointestinal variety. Up to 20% of Americans, according to Harvard Health, suffer from either irritable bowel syndrome (IBS) or functional dyspepsia, otherwise and more commonly referred to as an upset stomach. Experts explain that these disorders are characterized by the nerves responsible for regulating digestion reacting in a hypersensitive way to any kind of stimulation.

IBS isn’t typically regarded as serious – there are no accompanying lesions or tumors or something even more serious, like severe blood loss. Sometimes, people are able to disregard it as it comes and goes, and may be an inconvenience, but isn’t anything that disrupts daily life on a regular basis.

For others, though, especially those who suffer with anxiety, IBS can be chronic. The abdominal pain, diarrhea, constipation and bloating can be so regular and so severe that it interrupts daily life. It can be embarrassing. It can prevent people from going to school, work, or even just leaving home.

“This is probably the thing I worry about most,” says Marie. “I keep a whole pharmacy of stomach stuff in my medicine cabinet. I have antacids in my purse for emergencies. I keep enemas and laxatives as a preventative measure if I know I’m going to have an event and I haven’t gone to the bathroom in a while. I have Imodium if I’ve forgotten to clear myself out and I don’t want to have to worry about needing to go to the bathroom.

“I know it’s so unhealthy to treat myself like this, but it is just such an insane and irregular system that I have and I don’t know what else to do. My doctor tries to teach me to get on a regular schedule but I can get so panicked and frustrated that it’s easier to just rely on what I know.”

Learn about how food attributes to anxiety levels.

Some folks with anxiety also report having chronic respiratory diseases. The American Lung Association published in 2018 that “with symptoms like shortness of breath and difficulty breathing, it’s easy to understand why anxiety is common in chronic pulmonary disease (COPD) patients.

“Anxiety can bring up feelings of nervousness and fear, and even physical symptoms which can impact day-to-day life… identifying, understanding and managing anxiety is important for people living with COPD.

“Especially since this connection between anxiety and COPD is associated with more severe COPD symptoms, (there is an) increased use of healthcare, more hospitalizations and need for treatment.”

The American Lung Association explains that our brains think we’re in the presence of danger when our breath becomes shallow. It makes sense, then, why anxiety is connected to respiratory diseases – we either panic because we’re breathless, or because we’re short of breath, our natural response is to panic.

The development of heart disease has also been associated with anxiety. Like chronic respiratory disorders, it could be that the anxiety is brought about as a result of being diagnosed with heart disease, or it could be that a serious cardiovascular issue – like a heart attack – is more likely in those with an existing anxiety disorder.

The Lown Cardiovascular Institute in partnership with Harvard Medical School, and a collection of Canadian medical colleges performed two separate studies on this connection, and found that those who suffered from an anxiety disorder were two times as likely to have a heart attack as those who did not.  The Women’s Health Initiative also compiled data from a group of almost 3,500 postmenopausal women, and found that having a history of panic attacks tripled the risk of stroke or other coronary event.

If I get treated for anxiety, do these other illnesses go away?

If you have anxiety and have also been diagnosed with other disorders or ailments, seek treatment from a medical professional as well as a licensed therapist. Although your anxiety may have been the root cause of your illnesses, or has become an unwelcome addition to your current state of health, it’s important to know that all of your symptoms are real, treatable, and must be properly assessed, diagnosed and treated. Read about how exercise can help your anxiety.

For further guidance, visit us at www.hopetherapyandwellness.com.