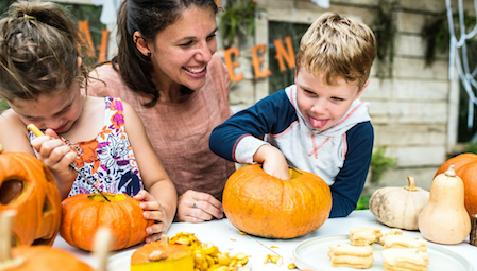 Rick has been married for 15 years. His wife, Sue, “is the most loving, patient, compassionate woman I know,” he describes. “She has to be, to have put up with me all these years.”

Rick is what he defines an “oddball,” the black sheep of his conservative, quiet family. He’s loud, excitable, and has a deep, memorable laugh that fills an entire room. When he speaks, he has a tendency to look away from whomever he’s having a conversation with, as if it pains him to look them in the eye.

As a child, Rick was a loner. He didn’t choose to have very few friends, he explains, but had a rather difficult time making them. Adopted at infancy, Rick later learned that his birth mother had used drugs while pregnant with him; to him it explained his low comprehension levels and a host of other learning and social disabilities that plagued him through childhood and young adulthood.

“I was that kid that people kind of either ignored or stayed away from because they thought I was weird,” says Rick, now 38. “I did things that I guess weren’t considered normal.”

Six boys, all around the same age, lived in the small subdivision Rick’s parents decided to buy a house in; it seemed a suburban family’s dream, with perfect green yards leading to pristine architectural designs, ostensibly created for upper to middle class families with a little girl in ballet and a boy in soccer. But while the children gravitated to one another, hopping from one backyard to the next, the parents – busy with heavy work schedules or simply on the quieter side – rarely conversed, keeping to themselves unless accidentally mowing the grass at the same time or pulling out of the driveway.

One afternoon, a blood curdling shriek rang through one of the crescents. One of the boys, Sammy, was flat on his back in his own front yard, four of the boys screaming and surrounding him. At first blush, it might have seemed as though they were ganging up on him, but that wasn’t the case.

“I was stomping on his chest as hard as I could,” Rick remembers, tears welling in his eyes. It’s almost as if the memory is so vivid that he can feel Sammy’s pain. “I have no idea why I was doing it. I just know I wanted to, and I couldn’t relieve myself of that urge until I did it.”

Sammy’s mother heard the screams and ran out onto the yard to stop Rick. Rick recalls snapping straight up to see her red, angry face approaching him, fists at her side. “I started yelling, ‘I didn’t do it! I didn’t do it!’” Rick recalls. “I ran home and told my mom that Sammy was stomping on me.”

That episode began a series of other violent events. By the time Rick was 12, his adoptive mother (his adoptive father had left them two years earlier), he had been expelled from three schools. His mother tried to homeschool him, and re-enrolled him in the public system after Rick had set the basement on fire. (To clarify today, Rick says he’s never been diagnosed with pyromania, but explains that he’d set the fire because he was ‘curious’ and ‘infatuated with flame.’)

Rick as an adult

When Rick met Sue, he said it was love at first sight. “I couldn’t get enough of her, and I figured it was maybe because she was the first person who ever seemed truly interested or invested in me,” he says. “She didn’t push me away even when I got really needy, and she would laugh with me instead of at me. That kind of thing.

Sexually, Rick says, it was the same. It was an urge he could barely control, a need for her he couldn’t explain.

What surprised Rick, he admits, is that while he believes most women would have been frightened away by his behavior, Sue saw things differently.

“Rick never hid anything from me,” she explains. “From the very beginning, he was an open book – he told me what he knew about his birth mom, he told me about his violent tendencies when he was younger. He told me he could never seem to stay in relationships because girls got freaked out and left him all the time.

“I thought his candor and honesty was so refreshing. I saw a person who needed love.”

But even with Sue’s kindness and compassion, she knew something deeper was at work. She encouraged Rick to see a therapist, one who would help examine his behavior and asked him not to stop at blaming it on his past.

“I told him that maybe there was some kind of personality disorder was at play, and that wasn’t a bad thing, but that it’s like, headaches or something,” she says with a small smile. “I know – it’s a terrible comparison, but it’s something he understood. If you live with headaches long enough, you learn how to deal with it and you somehow even believe it’s normal. But don’t you want to find out what the cause of the headaches is and maybe figure out how to get rid of them? I mean, just knowing there’s the potential for healing is amazing.”

“So when I was diagnosed, it was a huge weight off my shoulders,” admits Rick. “Deep down, I felt like a freak. And I was frankly getting really tired of feeling ashamed about myself.

“This gives me clarity. On top of that, with my therapist, I feel like a load’s been taken off Sue too – she was my everything for so long. She still is, but she really carried everything for a while, and being someone’s caregiver 24/7 is a chore. More than a chore – it’s a lifestyle.”

What happens, and what is the course of treatment, when a person is diagnosed as having an unspecified impulse control disorder?

Many symptoms that are generally tied to one or more of the five main impulse control disorders – trichotillomania, kleptomania (read about the signs and treatments), pathological gambling, pyromania, or intermittent explosive disorder – may present in a person with unspecified impulse control disorder. If a person constantly lies about his or her behavioral, or is in denial, it generally points to proof that there’s a problem. So too is the appearance of other social difficulties that arise as a result of the problematic behavior.

Typically, if a person feels tense or anxious before the impulse or urge to act arrives, and then feels a sense of relief, joy or satisfaction after committing the behavior, that’s a good indicator that a problem exists. It’s common for this cycle to repeat again and again, increasing in severity – the individual starts to feel less and less satisfied with smaller activities and gradually moves on to more severe behaviors. The cycle then becomes just that much more difficult to break because the pleasure centers in the brain are reinforced by the behavior and impulsive activities.

The following are some indicators that there’s a problem:

Learn about how compulsive buying can be linked to impulse control.

Similar to other impulse control disorders, the causes for unspecified impulse control disorder are unknown. However, experts believe that they may be biological, stemming from neurological issues. When a person performs the impulsive act, resulting in pleasure, the behavior is reinforced. The individual then learns to seek that cycle, making it hard to resist without treatment.

Is there a treatment for unspecified impulse control disorder?

While medication may be necessary for some individuals, particularly those with a co-occurring disorder, cognitive behavioral therapy is a powerful treatment for unspecified impulse control disorder. Mental health professionals with a specialty in impulse control disorders will be your lifeline if you think you may suffer from this; under their care and guidance, you’ll be able to develop better control, learning how to substitute your negative behaviors with better, more positive activities.

If you or someone you know may have unspecified impulse control disorder, visit us at hopetherapyandwellness.com and speak with a licensed and compassionate therapist today.