Public speaking anxiety: How to avoid panic attacks in front of crowds 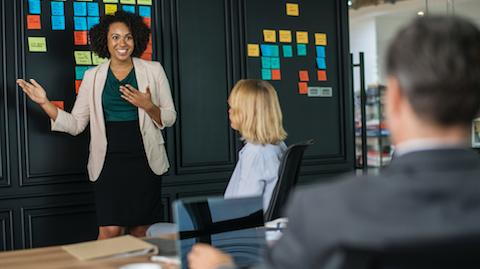 Shianne had always been at the top of her class, a model student that was admired by her peers and appreciated by her educators. She was thoughtful, witty and bright, organized and prepared, and never one to say no.

Except to one thing: public speaking.

“It doesn’t matter if it’s a crowd of ten or a crowd of a thousand,” says Shianne, who graduated from her local community college with honors. She now works at a non-profit. “As soon as I even just think about speaking in front of people, I can’t breathe. My hands get all sweaty and I feel like throwing up.”

Public speaking anxiety isn’t atypical; it’s actually one of the most commonly reported social fears today. Many people tend to feel nervous when giving a speech or presenting to crowds – even timeless legends like Barba Streisand have shared their experiences with crippling stage fright – but if you already have an existing social anxiety disorder, the anxiety that comes with public speaking could take on a life of its own in your mind.

The symptoms of social anxiety disorder are actually quite similar to the symptoms reported by those with public speaking anxiety. They include shaking, excessive sweating, palpitations, shortness of breath, dizziness, nausea, stomach upset, blushing, or even a shaky voice. Those who suffer from public speaking anxiety may feel these symptoms as soon as they realize they’re going to have to speak in front of a crowd, even if it’s months in advance. These symptoms are what experts say are a result of the fight or flight response (that rush that runs through your veins when you think you may be in some kind of physical danger). And even though you’re not in any physical danger, when you suffer from public speaking anxiety, the thought of having to open your mouth and say things in front of a crowd most definitely feels to your body as if you are. Read about how working out can help your anxiety.

“(Public speaking anxiety) is definitely something not a lot of people have sympathy for, at least in my experience,” she shares. “I mean, most people have said, ‘Oh yeah, I totally get it. I hate speaking in public,’ but they don’t really get it – they think it’s something everyone feels and everyone gets over and you just get up and do it.

“Most people have no comprehension of how it can totally interfere in your life. It can be depressing. It is depressing.”

Unsurprisingly, Shianne says her father admitted to having public speaking anxiety as well. While Shianne, with the help of a compassionate therapist and a strong support system, has been able to live with and manage her anxiety, her father wasn’t as successful – at least not earlier in his own life. Read about the conmon fears about going to therapy.

“My dad went to college but dropped out of all the classes where he had to make oral presentations, so he didn’t finish getting his degree,” she says. “I’m not just saying this because he’s my dad, but he’s a brilliant man with a lot to say. He just hasn’t been able to grab on to opportunity because of his anxiety. I really think he’d have made a great teacher because of his wisdom and just the way he looks at things, and I think especially because he has anxiety, and because he’s internalized so much, he should have even more to say.

“But because he’s never been able to manage it – and I mean his anxiety as a whole, not just his public speaking anxiety – it’s really held him back.”

I have to speak at a public venue. I’m not handling it well at all. What can I do?

There are numerous tactics you can employ to help you cope with your anxiety, in addition to seeking assistance from a licensed therapist. With an arsenal of tricks up your sleeve, you’ll be surprised at how much more comfortable you’ll be getting up on that stage or podium. Here are some tips and ideas to help you boost your confidence and focus on getting out there and getting heard.

Familiarize yourself with the venue. Where will you be speaking? Is it in a large auditorium? Is it in a smaller classroom? Is it on stage at a park? Try to visit the space in which you’ll be speaking, and get in touch with the individuals who’ll be in charge of any equipment you may be using, like a microphone or projection screen. Even if you don’t have your speech written out or memorized yet (if you have to memorize it at all), feeling at home at the venue will go a long way to helping you deliver your message when the day comes. It’s a lot better to recognize your surroundings when you’re finally giving your speech or talk, rather than having a brand new environment to have to worry about too.

Get excited about your topic. If you’ve been asked to speak on something, chances are you’re considered somewhat of an expert on the topic. Which means that not only do you know your topic well, it’s probably something you get excited talking about. Focus on your topic and get excited that you’re going to be able to share everything you know, rather than on the fact you’re delivering it to a group of people. When you’re engaged and enthused about something, you’ll get lost in it – and you’re more likely soon forget you’ve got eyes on you.

Practice. Forget the old adage “Practice makes perfect.” This isn’t about perfection, but rather a way for you to rehearse how you want to sound. Even the most confident of speakers don’t get up to speak in public without practicing their talks over and over and over again. This will permit you to hear how your sentences sound out loud, provide you with the opportunity to time your speech, and adjust certain portions of your content if required. This is where you can have a lot of fun – you get to deliver your message the way you want to, without eyes and ears looking and listening in.

Visualize success. Did you know that sports legends Muhammad Ali, Wayne Rooney and Michael Phelps all practice visualization sessions before going out to play? Visualization – the act of using your imagination to mentally rehearse your desired outcome – is actually a quantifiable technique used in modern sports psychology. Individuals who utilize visualization use all of their senses – soccer athletes, for example, imagine the scent of the grass under their cleats, the sound of the crowd cheering, the bright sun shining down on the arena.

According to scientists, this kind of visualization for athletes actually triggers neural firings in the muscles and creates what they call a “mental blueprint.” The simple act of imagining certain moves produces almost the exact same muscle patterns as when an athlete is actually, physically completing them. This means that the mind doesn’t differentiate between the physical act and the imagination.

So how does this work for you? Picture yourself delivering the message with ease, grace, poise and calm. Visualize not only how you want to portray yourself, but also any potential issues, like rising feelings of anxiety or stress, or how you’ll answer questions that might be thrown your way at the end of your speech. In your perfect world, how will you deal with it? Mental rehearsal is awesome because every detail is entirely up to you – and if science has it right, visualization helps you get several steps closer to actualizing every one of those details.

Still not convinced? Think of it this way. Picture yourself having a complete meltdown or giving a terrible speech. Why would you think picturing that kind of scenario would make it real, but picturing success wouldn’t? Experts stress that the cycle of anxiety is not only a reaction to an event, but also self-fulfilling prophecy. Give our gentle advice a shot. Imagine success, and success will be sure to follow.

Put it all into perspective. It could be that all of these tips here, coupled with therapy, still don’t erase your anxiety altogether. And that’s ok. Even the world’s greatest orators get anxiety before getting up in front of crowds; many even believe their anxiety makes them better.

While you can accept your anxiety, you can also set goals for yourself to become a better speaker. Practice in front of a group of three first, then ten. Or perhaps record a video on your own, and upload it to your personal social media. With practice and treatment, public speaking does get easier.

If you or someone you know has public speaking anxiety and you’d like to speak with a knowledgeable, compassionate mental health professional, visit us at www.hopetherapyandwellness.com.