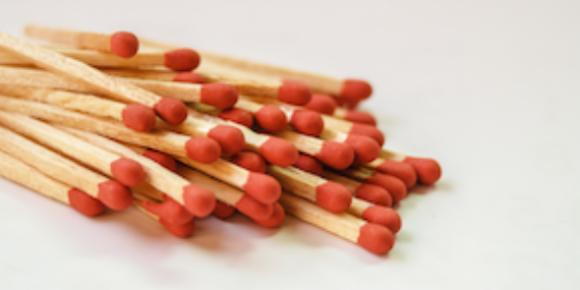 The term ‘pyromaniac’ is thrown around casually and too often; the word typically strikes fear, disgust and misunderstanding from the general public. To the unenlightened, a pyromaniac is a maniacal, crazy person with an evil obsession with fire and destruction, seeking to hurt people and things any chance they get. Pyromania is often equated with arson, when the truth is that that’s simply not true.

Pyromania is an impulse control disorder, a mental illness characterized by a person’s need to set fire. It is not an intention to hurt or destroy – it is just to satisfy an inner obsession to set fire. That’s it. While an arsonist sets fire to hurt or kill, destroy property, gain a financial reward or to conceal some other criminal activity, a pyromaniac seeks only to set fire.

Learn about other types of impulse control disorders and their symptoms.

Kyle, a 40-year-old musician, says he believes his obsession with fire started at the age of six. “My mom collected candles, and they were always on in every room of the house,” he recalls. “She used them to make the house smell better or just to relax. She liked smells like vanilla or cookie dough or what she used to call ‘gourmand.’ I loved that the house smelled like she was baking all the time. To this day, anything that smells like cookies reminds me of her.”

While Kyle speaks of his mother fondly, his voice deepens as he continues to share his story. “My mother had a boyfriend who was also named Kyle,” he shares. “Everyone liked him – he was a money guy, an accountant or something, really educated. He didn’t have kids of his own but he didn’t seem to mind my mother’s baggage, which was me. I was a pretty quiet kid but I had health issues, so I was home sick a lot.

“When he and my mom started seriously dating, Kyle started offering to pick me up from school when I wasn’t feeling well or if she had to take a couple of extra shifts at the store she worked at, he would stay with me. Everyone thought he was this knight in shining armor for her, like ‘Hey, look at this stand-up guy. He’s a keeper, Mary.’”

What young Kyle’s family didn’t realize was that his mother’s boyfriend used these opportunities to molest him.

“He would light my mom’s candles when we got home, almost as if he knew that they were a source of comfort for me,” explains Kyle. “I remember, so often, staring at those candles and losing myself in watching the flames. I trained myself to leave my body and just focus on the flickering of the candle, the thick little wisps of smoke that would rise up especially if the wick was a little too long. If I could focus on the candle, I wasn’t feeling anything else.”

It was then, Kyle believes, that his obsession with fire began. His mother never learned of the abuse, and her boyfriend eventually left her. But the damage to Kyle remained, and grew.

As he got older, he would experiment. He would sneak a lighter to school, locking himself in a bathroom stall and lighting the corners of his binders or small scraps of paper and then flushing them down the toilet. As a young teen, he would sneak out in the middle of the night and start small fires inside metal bins in the alley behind their house. Later, he would light larger items – chopped up wood, discarded furniture, and eventually, bushes and trees.

“I’m scared every time,” admits Kyle, “but the relief is so much bigger than the fear. I don’t want to hurt anyone, I don’t want to destroy anything of value to anyone, I really don’t. I don’t know how else to explain it, but there’s just such a rush of relief when I set fire to something. You’d think I would be satisfied with just seeing flames, right – like people would probably think, ‘Just sit in front of a fireplace,’ or something. But it’s not that… I have to control it. I have to set it. That’s what makes me feel better.”

Pyromania symptoms are quite unique. The main symptom is the obsessive impulse and need to set fire in an effort to experience relief, like Kyle shared above. Typically, a person with pyromania will feel emotionally overwhelmed, and feels an intense, burning desire to set fire to something. It’s not entirely dissimilar to a person addicted to drugs or other substances – the need to light something up is like the need to inhale or smoke or drink.

After the fire-setting behavior, the pyromaniac feels a sense of release. It can feel like a subtle relief or overwhelming, inexplicable pleasure.

Experts say that the causes of pyromania fall into two distinct categories: environmental and individual. Pyromaniac behavior, or the act of setting fire, is a coping skill for a much deeper issue, and is the skill the person has subconsciously chosen despite how dangerous it is to others and to themselves.

Environmental factors that might cause pyromania include experiencing sexual, physical or emotional abuse as a child; neglect from parents or guardians as a child; or even watching other siblings, friends or adult family members set fires. Individual factors may include lack of attention or social support from adults and guardians, being a victim of bullying, or even experiencing inappropriate sexual urges.

Typically, a pyromaniac has experienced a significant amount of stress, and fire setting has become a way of relieving that stress. Often, the pyromaniac is also struggling with deep feelings of depression and suicidal thoughts, and poor interpersonal relationships and lack of skills to deal with those feelings give way to the bad behavior.

Studies have shown that for the most part, most cases of pyromania disorder are reported in children and young adults. Many exhibit anti-social behaviors, run away from school or home, or vandalize property. Some may also be diagnosed with anti-social personality disorders, ADHD or other impulse control disorders. In all cases, they have either experienced or are currently experiencing extreme levels of stress.

We want to help you relieve any stress you may be feeling, read about how acupuncture can be calming.

Is there a pyromania test?

To be diagnosed with pyromania, DSM-IV-TR (the Diagnostic and Statistical Manual of Mental Disorders – Text Revision) specifies that there are six criteria that must be met. They include the following:

Diagnosing pyromania can be quite difficult and complicated as it is so rare; some professionals even believe that impulse control disorders shouldn’t be categorized on their own and are just self-control issues that are part of other larger psychiatric disorders. It may also be difficult for an individual to find an expert or mental health professional with experience and education in the area of fire-setting and pyromania, with some professionals simply including the behavior as part of a bigger set of dysfunctional behaviors.

If you're reluctant to start therapy, or have any fears about it, read this article we made that will debunk your worries.

Various approaches can be utilized when seeking out the best course of treatment for someone struggling with the disorder. Often, it depends on the person’s age.

In children and young people who have been diagnosed with pyromania, treatment seems most effective when therapists opt for a case-management approach as opposed to a model that focuses on medicine.  It’s been reported that often, juvenile pyromaniacs come from destructive or chaotic homes and backgrounds.

Children and adolescents are typically interviewed, alongside parents or guardians, in an effort for the therapist to unearth the kind of stressors that might be present, the amount of supervision, discipline or care, and other home-life factors. Treatment will be tailored specifically to meet the needs of the child and based on his or her home situation, and will often include anger management skills, communication skills, problem-solving, aggression replacement, and cognitive behavioral therapy.

Treating pyromania in adults may be harder, especially if the adult pyromaniac refuses to cooperate or has very little insight into his or her past and current behaviors. Treatment may include psychiatric or talk therapy, but will usually also include medication, including antidepressants (used when the pyromania is caused from traumatic events); mood stabilizers (used when professional feel as though the root cause of a person’s need to set fire is due to mood wings); or anti-psychotics (used when an individual is believed to have lost all sense of reality). Long-term insight-oriented psychotherapy is also considered an essential part of pyromania treatment in adults.

If you or someone you know may have pyromania disorder, visit us at hopetherapyandwellness.com and speak to a qualified mental health professional today.